A Conversation With Mark Kelly

Posted 2/17/2019 11:31:00 AM
In a quick conversation with Mark Kelly, I reviewed a few stats about gun shows,  He finished my sentence.  His knowledge is all encompassing of the issues including gun shows.  He stressed the accomplishments of Giffords: sponsorship of 250 pieces of legislation in 45 states.  He stressed what we have proven in California:  common sense gun legislation saves lives.   Then he pointed out that we have Nevada and Arizona on our borders and their lack of gun safety laws makes us less safe. He made the argument that unless we elect Mike Levin to congress and have a Democratic majority, we will face the possibility of the passage of NRA legislation pending in Congress now.  They are: NRA efforts to expand Concealed Carry reciprocity nationwide; legalizing gun silencers; ending gun free zones at schools from K through 12; disallowing funding for the CDC which would study the impact of gun violence on the health of our people. He reminded us that all this legislation could become a reality if we do not have a Democratic majority in Congress.  He wrapped up with a fact we know all too well: the United States only surpasses Yemen in less deaths from gun violence.  He stated  that the USA is ranked between 20th and 25th among industrialized nations in safety from death by guns.
When Gabby spoke she was loud and clear that this is a fight we must all undertake.  Her strength was like a blessing on all of our efforts.
When Mike Levin spoke he gave a special acknowledgement to a local student who lead her school in the walk outs in memory of the Parkland students.  He then turned his praise to  those present from Moms Demand Action and NeverAgainCa for all the work that we are doing to end gun violence.  It was honor to be recognized in front of the Gabby Giffords and Mark Kelly  and the 200 plus people present.  Mike shared that Gabby and Mark had filmed a campaign video with him in San Clemente in support of his election not far from the Nixon White House!
To all those who have volunteered for the Brady Group, Moms Demand Action and NeverAgainCa, I express my appreciation for making our efforts recognized before two heroes in our efforts to end gun violence in the USA. It was truly an inspiring moment.
Reactions:

Popular posts from this blog

We need your help!

Posted 7/14/2019 01:09:00 PM
You helped stop the gun shows in Del Mar. Unfortunately, the THE GUN SHOW MORATORIUM IS IN JEOPARDY AND WE NEED YOU TO SHOW UP ON TUESDAY, July 16, at the Board Room on the southern end of the Fairgrounds. Free parking IN THE MAIN PARKING LOT. The meeting starts at 1:30pm, but please arrive 30 MINUTES EARLY at 1pm for a seat. **The San Diego Gun Owner’s Association (supported by the NRA) has filed a lawsuit against the Fair Board challenging the gun show moratorium. A judge has issued a temporary injunction and the GUN SHOW MORATORIUM MAY BE OVERTURNED! This is a special meeting of the Fair Board on how to respond to the lawsuit. They will hear our comments and then go into closed session. As before, they will be counting faces on both sides of the aisle and we all need to show up in our ORANGE T-SHIRTS or other anti-gun violence organization T-Shirts and let our Fair Board know that we are counting on them to STAY THE COURSE and DO THE RIGHT THING by FIGHTING THIS LAWSUIT! O…
Read more 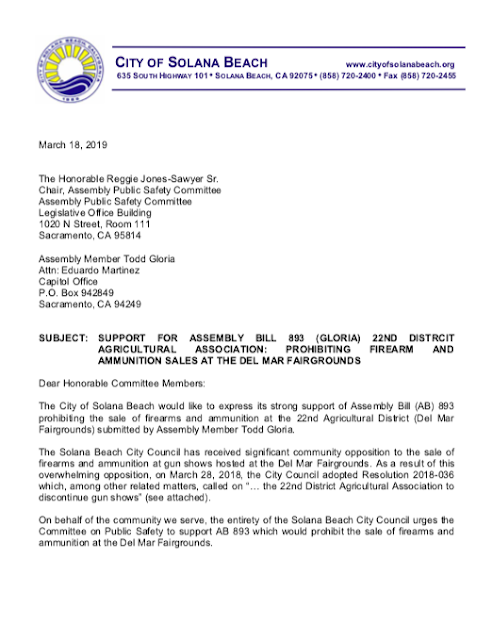 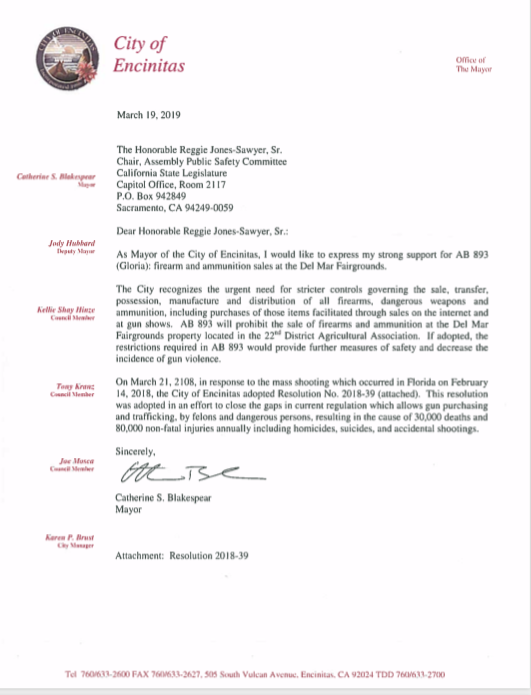